Is Libre Computer the same as LoveRPi?

Is Libre Computer the same as LoveRpi? I ask because if this is so and judging by the lack of response, your customer service e-mail address seems to be going to /dev/null. I have attempted to contact regarding 1 of 2 eMMC modules I ordered that seems to have experienced a hardware failure about 17 days after arrival. I figured maybe delays might be expected from the holiday season but nothing has happened 3 weeks later.

What is wrong with the eMMC module?

The issue seen is no boot, no green light, blue & red lights are on but steady, no HDMI output when I previously could go to the Raspberry OS desktop and do anything I’d be able to do in a Raspberry Pi OS environment & had long up times (long being a relative term since I just bought it & started playing around with it). The issue follows the eMMC (that is either board will boot but only with the other eMMC).

Under the assumption that I could have an issue of corruption rather than an irrecoverable hardware fault, I tried to follow the directions at Libre Computer AML-S905X-CC eMMC Flashing Steps from Linux : so doing both an eMMC erase (again, in case it was a corruption) and running the script to make the eMMC show up as USB mass storage. Unlike previous times with these scripts, the drive remains undetectable.

So my assumption is that some sort of random hardware failure happened.

Of course, any additional troubleshooting suggestions are welcome but that’s what I have so far.

It makes the drive undetectable when following the directions at the eMMC flashing thread.

By which I mean, a tool like the various drive utilities on Linux or the Raspberry Pi imager should be able to detect it (as has been the case before this failure).

Check to make sure the mechanical pins are not damaged. What is the output on UART when eMMC is plugged in? eMMC is a wear item and not covered under the general warranty as it is electrostatically sensitive. If you plug it in and it doesn’t boot, it simply means the boot data is incorrect.

You can also boot via MicroSD card. When the board is booted, attach the eMMC and follow this. Copy and paste the dmesg output.

Sorry, I could not get back to this this last week.

Remembered I have a USB microscope & took a look.

This is what I found: 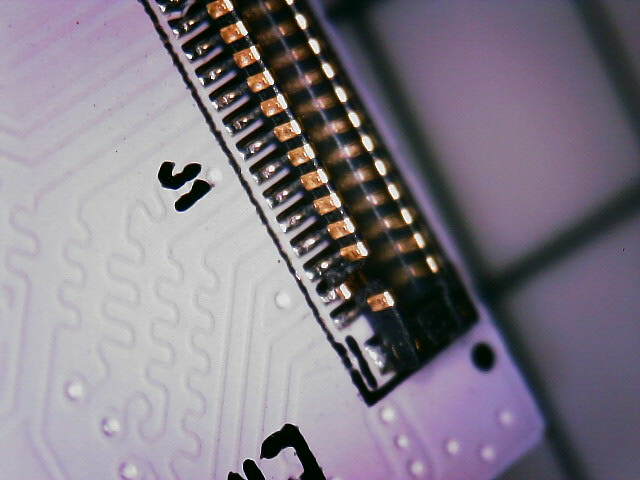 Found some binocular lenses & an old sewing needle kit (with a calendar on it for 1904!) and tried to poke that contact into a position that looked right: 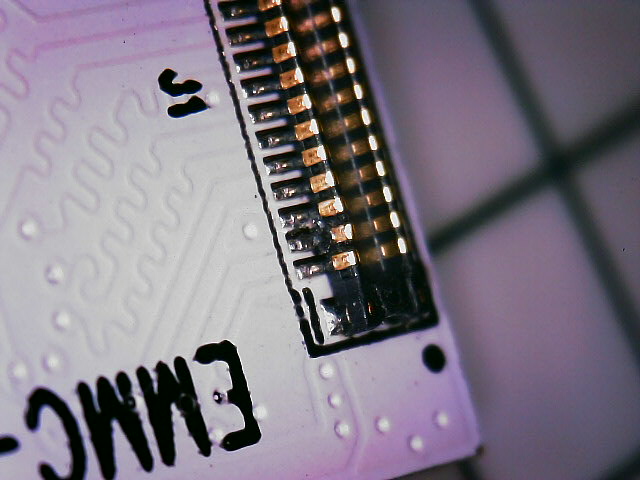 It is now recognized!

This is why we put the male pins on the eMMC daughter board rather than the SBC. The male header is much more fragile than the female header.