Hi all, I recently posted about docker crashing but am now using the official Raspbian image instead of Armbian. Posting here assuming it’s a board specific issue as I’ve never had this problem with a fresh inatall on a rpi or desktop Linux distro.

The problem I am having is the whole board crashing while downloading/extracting a docker image. I had the problem while installing octoprint and home assistant but I got around it by starting the docker daemon with “–max-concurrent-downloads 1”. However I am trying to download docker monitor for Home Assistant and getting the same problem again no matter what I try.

The docker service is not just stopping but the whole board is crashing and then will refuse to boot for about 10 minutes. Sometimes the heartbeat light will flash a few times, other times it will go off after the bootloader runs then never beat. Once booted, I can stop and start existing containers with no problem and run other services.

Looking for some help/diag steps to solve this, thanks. 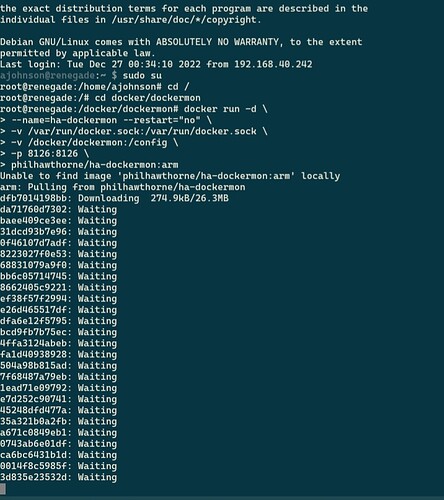 Crashing is too generic a term. Does the board stop responding or resets or shutdown? LEDs? Need a more accurate description.

Sorry, red light stays on but green light either goes out or stays solid with no response until power cycled. Gets to the bootloader on reboot but fails to actually launch into Raspbian lite. I get HDMI out with the loading screen for about 10 seconds then it goes off. If I wait about 15 minutes to give it power it boots right up.

I believe I have solved this issue…

I previously thought my Samsung power brick was giving me 5v/2a like it says on the back of the brick. My symptoms were condusive to those of other pi owners using other lower power adapters except I was not losing the lights on the board/restarting just getting a solid red light and no restart.

I have an old Microsoft Surface power brick at work that has a 5v/1.5a power output on the brick and while using that for power, I have not had any problems. Came to the conclusion that the docker image extraction process was requiring a lot of power and even tho limiting max concurrent downloads to one before solved my problem, it wasn’t a permanent solution.

My guess is that this phone charger is not rated to continually give what it says it can. RTFM I guess… 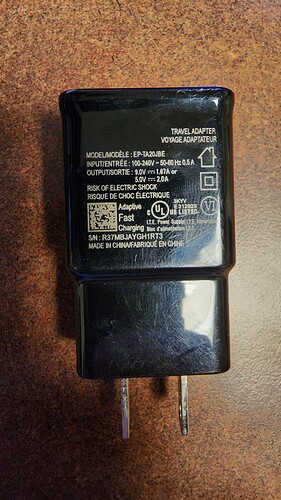 There is a lot of fake Samsung chargers. Never trust the label. Where you buy it matters. 99% of user boot issues is not because of our board.

We have one of the most stringent validation tests in the industry that verifies the board stability by running everything on the SoC to the limit.

I know it’s a real Samsung charger, it came with the phone when I got it a few years back. I just don’t think it’s outputting what it says it does… I am starting to notice that lol. Thanks

There are also situations where the contact pins corrode over time causing lower current delivery capabilities over time. Normally the pins are solder or gold coated but that wears out over time. The aluminum or copper underneath oxidizes and increase impedance resulting in lower voltage/current.