This will be renamed soon so don’t rely on this URL: 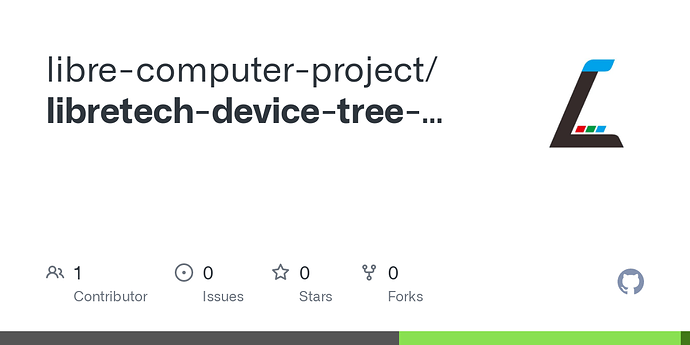 Contribute to libre-computer-project/libretech-device-tree-overlay development by creating an account on GitHub.

The asound conf is not in /etc/alsa/. It’s my mistake, it’s in /usr/share/ something.

I will see about pps-gpio.

The x11 components should be in /usr/share/X11/xorg.conf.d. Not sure they’re even needed though.

Write that to a blank USB drive and it will write new firmware to the board.

This build does not have LOST on board but we will be re-incorporating LOST in the future.

We are preparing new images today for AML-S805X-AC to improve performance of the browsers given the limited memory.

I see the updates listed for the last few days on the original post, are there images to go with?

Should have a new set uploaded tomorrow.

I’ve tried using the file you pointed with a freshly formatted FAT32 drive, but the board doesn’t seem to do anything when connected to either of the usb ports. I’ve tried removing the eMMC flash as well. I’ve used this drive in the past to flash the firmware, so I know it works.

Out of curiosity, for the AML-S905X-CC, can we just DD the raw block structure from the SD card to the eMMC (something along the lines of dd if=/dev/mmcblk1 of=/dev/mmcblk0 bs=1M) or will the final Ubuntu 22.04 build have a deployment tool similar to the lc_distro_transfer tool that was included in the Ubuntu 18.04 and Debian 9 images?

You need to use Win32DiskImager or equivalent to flash aml-s805x-ac-spiflash to the drive. It’s a raw disk dump, not a copy.

In La Frite, press escape and go to “Boot USB” and it should start the flash.

You can follow the steps here to expose the eMMC as a USB flash drive. Then just do dd of the raw image onto the eMMC. Be careful as to not wipe your own hard drive though. If this is intimidating, just use gnome-disk-utility to restore the raw image instead.

Perfect, thanks! I already used that procedure to wipe the emmc partition table and bootloader before, didn’t know it could be used to flash images too. That’s really convenient!

u-boot can only drive the OTG port in PIO rather than DMA mode so you’re limited to about 10MB/s using this method. It might be faster to boot into Linux on a MicroSD card and then dd from Linux to the eMMC from an image on the MicroSD card if the image is huge.

Sorry, I thought the procedure only required copying the files to an empty drive, like it used to be with old firmware updates. I did flash the firmware using Rufus and everything went smooth. I’ll check if the network issues are now gone soon.
Thanks!!

We have to re-implement the bootmenu to sync with some changes in upstream u-boot. You can press escape and then enter “run bootcmd_usb0” for now.

Since the changes are pending and won’t be ready until October, we’ll wait til then to finalize the bootmenu.

This is also what I got before using bootflow.
Same thing happens when trying to boot an openSUSE tumbleweed image.
Could this be related to DTB changes in the new firmware?

We have to re-implement the bootmenu to sync with some changes in upstream u-boot. You can press escape and then enter “run bootcmd_usb0” for now.

Since the changes are pending and won’t be ready until October, we’ll wait til then to finalize th

I’m running La Frite using the Ubuntu 22.04 server image from August 21 provided for this board. I’m monitoring the board through UART, but a monitor is also conected if its relevant

These are just generic warnings and can be ignored.

These are normal messages about booting.

The boot process stops at that point, and even after several minutes I don’t get a login prompt or anything else

I assume the ethernet patch isn’t yet on linux mainline, but it is present on the v5.19/libretech-master branch on the libre-computer github repo, isn’t it?